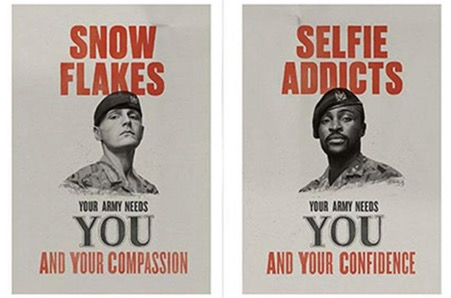 What we can learn from their controversial “snowflake” ads?

The British Army, best known for their macho call to arms, recently launched a new recruitment campaign aimed at bringing young people into its ranks. The campaign, titled “Your Army Needs You”, included a range of posters and videos targeting 16 to 25-year-olds.

So far not that’s not much to write home about, right? The army has and always will require fresh and eager new recruits to join. What did cause a stir is the kind of young people they were seeking out and how they were doing it.

Instead of rallying cries of “honour” and “fighting for your country”, they attempted to mobilise very specific market segments with terms that are generally considered to be insulting to millennial and Gen Z generations. These included snowflake, selfies addict, phone zombies and class clowns. 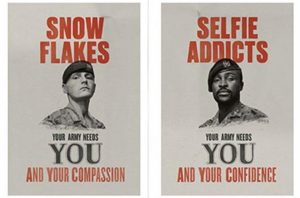 This change in tack comes at an interesting time in army recruitment, with the US recently confirming plans to be less inclusive with who they allow into the armed forces with the placing of restrictions on trans soldiers. But recent statistics show that the British Army is falling short of its manning requirements – with only 79,640 soldiers registered out of a requirement of 83,500.

So, perhaps a change in tack is understandable. But the reception (much like war itself) was pretty hostile – criticism came from existing squaddies, members of the general public and even one of the soldiers who volunteered to feature in the campaign. The soldier in question appeared on the snowflake variation of the poster and is said to object so strongly to the copy that he plans to resign at the earliest opportunity (so, let’s hope that there is at least one recruitment made from it!).

Given the divide in opinion that this campaign has generated, what lessons can we learn from a branding and advertising perspective?

Make sure that your communications pass “the first glance” test

Much of the criticism of this campaign stemmed from it being seen as offensive to the group it was targeting. And the last thing you want to do is upset the very people you are trying to appeal to, right?

But dig a little deeper and it becomes clear that rather than “negging” young people into signing up, the army was attempting to hold to account those who write these younger generations off. This therefore positioned them as an organisation that sees the potential in an otherwise marginalised group. 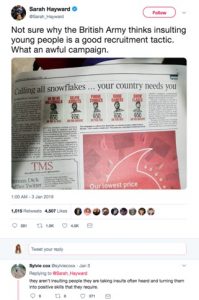 The problem is, whether online or in the real word, consumers are bombarded with content and don’t always take time to dig a little deeper. The terms “snowflake” and the cry of “me, me, me, millennial” are so impactful that some readers never really make their way to the final thought of the message. The risk with an approach like this is that you end up with an audience that is so busy being offended to that they don’t see the subtle but positive implications.

This is a valuable lesson. Make sure people don’t get so caught up on the clever eye-catching red herring that you’re enticing them with that they don’t get to, or fully understand, the reveal. The best way to do this is with user group testing. Get together sample groups of your target audience and ask them for their reaction to your creative. It is easy to forget you are coming to the table informed and with an understanding of intent and that this needs to be fully erased in order to assess what others will see.

While the point above stands, it is interesting to note that most of the online criticism of this campaign seems to have been levied against the posters. This highlights the fact that such a short and static snapshot may not be able to properly unpack a multi-layer message.

The videos however, had a lot more space for the topic to breathe. Not only this, but the twist (that otherwise undesirable characters actually boast desirable soldier-like traits) is not saved for the end but instead interspersed throughout the video and reinforced multiple times, making the message more than clear.

So, If you’re going to deliver a complicated message make sure you have space for the entire story arch to be not only delivered but consumed. When producing a campaign with different creative formats constantly ask yourself “will we lose the essence of what we are trying to say when the message is truncated”? 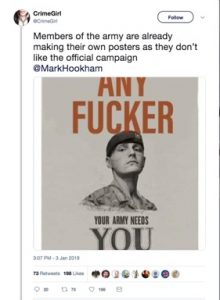 Another criticism that this campaign saw was arguments that it was tackling the wrong type of characters in the first place — that a “selfie addict” for example, does not a soldier make. Or, if it does, not one that will last for very long. Soldiers past and present particularly seemed vocal on this matter. Now, without a better understanding of the armies current and changing needs, it is difficult to comment on this. However, it does raise an interesting point, and not just for the British army…

LTV. Otherwise, known as lifetime value. That is (as you might have guessed) how much value (monetary or otherwise) a customer is going to bring to your business over time.

This is a major issue for organisations such as the army, which have to train and invest in all new recruits. And with forty-seven per cent of applicants in 2017-2018 dropping out of the process voluntarily, it is not an issue to be sniffed at.

But the same applies go your company — every communication / campaign / email is an investment of time and money and so should be aimed at customers who are going to give a good return. Misjudge who that is and how to entice them and you could be doing more harm than good to your brand (and your bottom line).

Now, we’ve covered quite a lot about vocal criticism but what has this campaign done well? 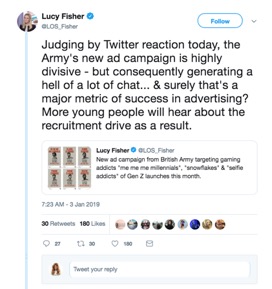 Love or hate these adverts, there is no denying that they have got people talking — there is, it seems, truth in the old adage “no such thing as bad press”. Sure, they could have done something similar with less-hard hitting and controversial copy but would be here writing articles about them if they had? Half the battle is getting noticed. Don’t be afraid to make waves. Sometimes a new idea may be misguided but it is those companies and brands that have never stood out from the crowd that will lose out eventually. Look at Nike’s recent campaign with Kaepernick or Gilette’s take on toxic masculinity in the wake of the #MeToo movement. So, go forth and be a brand that stands out, but be prepared to deal with the fallout.